Addison's Disease in dogs is brought on by an imbalance in hormonal output. Dogs' ability to overcome this imbalance naturally for thousands of years without toxic prescription drugs or harmful steroids is a question we had to ask.

Addison's Disease is a devastating condition that is believed to be an autoimmune disease. It is seen more commonly in female dogs than male dogs and doesn't normally come out until the dog is at least five and a half years old. This genetic disease is progressive and has no cure, although it can be managed.

Symptoms
If Left Untreated
Why are Adrenal Glands Important?
Symptoms

Following these symptoms the dog will go into an Addisonian crisis, which is a medical emergency from which dogs may or may not recover. It is essential to try to recognize Addison's early and get timely medical attention.

Why are Adrenal Glands Important?

Why are Adrenal Glands Important?

The adrenal glands are essential for a variety of body regulating functions including the production of important hormones like the stress hormone cortisol, and aldosterone. The adrenal glands also replenish electrolytes. Electrolytes like potassium and sodium regulate water intake and heart function. When production is damaged due to adrenal glands that are under attack, dogs can become dehydrated, develop an irregular heartbeat, or even go into renal failure.

The opposite of Addison's disease is Cushing's disease in which adrenal hormones including cortisol are overproduced instead of under produced. There is also a recommended safe and effective herbal dietary supplement for Cushing's in dogs.

Living with Addison's Disease in Dogs

While Addison's disease in dogs can't be cured, it can be medically managed so that your dog can have a good quality of life. Generally, your veterinarian will begin treatment with a corticosteroid. Doses are high at first and then reduced as electrolyte levels normalize. The steroid dose that will need to be maintained in order to keep your dog symptom-free varies by dog, but all dogs will need to stay on a steroid in order to prevent the disease from progressing. Steroids affect many aspects of your dog's life including food drive and aggression and may lead to related long-term health problems like diabetes.

Stress and Addison's Disease in Dogs

Because Addison's disease attacks adrenal glands which are responsible for producing the stress hormone cortisol, dogs that suffer from Addison's disease have a struggle with stress. Cortisol produces the fight or flight response which is essential to survival but damaging in domestic situations. Dogs may be inappropriately terrified of new people, traveling, thunderstorms, fireworks, etc., and sometimes our dogs just need to chill out. You can use this safe and natural herbal dog anxiety rescue when your Addison's dog is dealing with extra stress.

Thankfully, there are herbs that Naturpoathic doctors use instead of chemical steroidal drugs, without negative side effects. These herbs have been used safely and effectively throughout history to support a healthy adrenal cortex which then normalizes cortisol production and allows the body to naturally reduce symptoms. These special herbs make up the ingredients in our Primalix® Adadren™ for Dogs.

FREE USPS Shipping on All U.S. Continental Orders Over $89
1
1
Your Cart 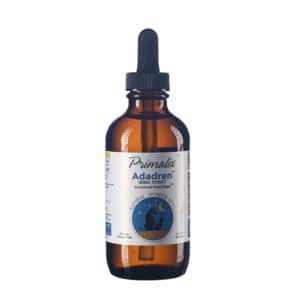